Click here for your FREE short story. Get it Now
0shares

3 Ways Susan Beatty Shares About Courage in Her Writing

I first met Susan K. Beatty when I signed up for a writing critique group over four years ago and was matched to her and a couple of other delightful writers, too. There are currently four of us in our monthly “Serious Scribblers,” and we support each other with projects and writing deadlines in between. Susan’s writing is contemporary and faith-based, and she writes about difficult times, exploring the intersection of faith, grit, courage, and forgiveness in her flash-fiction devotions, novelettes, and novels. After you’ve read “3 Ways Susan K. Beatty Shares About Courage in Her Writing,” enjoy my interview with her, and then you’ll want to jump right into her writing, too!

This post contains affiliate links. They don’t cost you a penny, and they allow me to keep writing! For more information, see my disclosures. 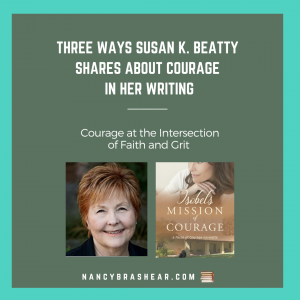 3 Ways Susan K. Beatty Shares About Courage in Her Writing

My Interview with Susan Beatty

Me: Tell us a bit of what Isobel’s Mission of Courage is about.

Susan: God had hardwired mission work into Isobel’s DNA. So what’s He doing bringing a homeless woman into her life … to help her? Recovering from surgery and chemotherapy means Isobel has little time or energy to spend on anything or anyone else, but when she sees a homeless woman hanging around her neighborhood, she can’t just ignore the need.

Homeless and ticked off at God, Noolie might just be the last person Isobel would ever imagine helping her, but Isobel needs it. Can she muster the courage to face her needs and allow a woman with nothing to meet them?

Me: Share a little about your novel, Faces of Courage, to be released in May, 2021.

Susan: This novel shows how one woman deals with a difficult past, an increasingly abusive husband, and a cancer diagnosis. Can she delve even deeper into her soul to find the courage to fight this battle? Will her husband stand by her or will she need to go it alone? Will she find her courage at the intersection of faith and grit?

Me: I know readers want to know you better. What’s your life like outside of your writing schedule? What fun things tickle your fancy?

Susan: In my spare time, I love to read, watch British TV, and try new restaurants (although that’s currently curtailed). Our family participates in cancer fundraisers and loves classic cars and motorsports, and we also enjoy camping. I love my family and have four children, five grandchildren, and five great-grandchildren, plus a former foster son and his wife and two children.

Susan has a lot of exciting news to share with you! 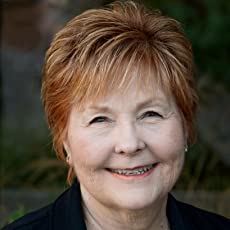 Susan K. Beatty is in her third career—from journalist to homeschool tech writer to her life-long dream as a novelist. After thirty-five years of serving as a leader in statewide and national homeschooling, she retired to focus on writing fiction. She is proof you can start a new writing career later in life. Susan published her first published fiction in September 2019 and is continuing to release other novelettes. Her first novel, Faces of Courage, will be released in May 2021. Susan is the author of the California Homeschool Manual (in her second career), was the assistant director of the SoCal Christian Writers’ Conference, and is the president of her local ACFW-OC Chapter.

Where can readers purchase your writing?

Thanks for joining us, Susan, and we’re looking forward to the release of your upcoming novel, Faces of Courage, next year! And I hope you feel lots of prayers of healing heading your way for both your daughter and you!–Nancy

We all face hard times. It’s inspiring to hear how others have done it, and I know YOU have something valuable to share on this topic. Describe a time you had to dig deep for courage you didn’t think you had. Please share your advice for us in the blog comments, so we can learn from you and your experiences.–thank you! Nancy

Previous Post: « 5 Fascinating Things I Learned from My Interview with Liz Tolsma