I first met the talented Dr. Katie Manning when she joined our English Department at APU as a professor of creative writing and poetry. Students immediately discovered this enthusiastic teacher and spread the word about what a helpful mentor she was. And she was a very fun colleague, who quickly became a friend and encourager of my own writing. A highlight was Writers Read (open mic) where Katie, a poet, regularly performed her pieces, each eliciting vivid images and highly-relatable stories. Her rendition of driving a convertible with her hair blowing in the wind sticks vividly in my memory years later.

In recent times, Katie had used musical improv techniques to intertwine her poetry performance with a renowned pianist, and she has sung poems, set to scores, accompanied by fellow instrumentalists. Who knows what creative form of expression her poetry will take next? The following interview only scratches the surface of some of the creative projects in which she’s involved, some of them in unexpected settings beyond the page.

Some Interesting Factoids About Katie:

The Interview (an insider look at creativity)

This was my back-burner project for the last decade. I was always focused on other poetry projects, but I kept writing game poems now and then. I used all sorts of board/card/dice/tile games as prompts, but then the poems were never about the games, of course. The poems explore memories, relationships, language, and more. Some are elegiac, some are funny, and all of them might actually be love poems in one way or another. 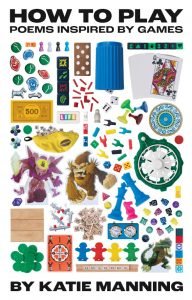 This is the first time I’ve gotten to be involved in creating a book cover, and I’m delighted by it! I had the idea to do a knolling image with game pieces for the book cover, but I didn’t have the skill to create it myself. Fortunately, I knew someone who did, and I was able to hire my former student, Mark Garcia, to create the knolling image and design the cover. He even came to my house to photograph some of the game pieces, and I got to work with him on sizing and other decisions for the images. I loved every bit of the process of working with Mark on this cover. 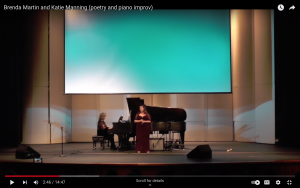 Katie: As a life-long choral singer, I don’t think I can adequately express how meaningful it’s been to have my poems set to music. I feel a little woozy discussing it. Was that real? It’s too good.

– First, Brenda Martin invited me to collaborate with her for a jazz concert. She improvised with some of my Bible-inspired poems, and we also set my poem “Carrying” to her song “Night Journey.” You can experience this poetry-concert from October 2018 here on YouTube. Singing one of my poems was terrifying since I hadn’t performed a vocal solo for an audience in years and since the lyrics were from an incredibly vulnerable poem, but it was also a wonderful challenge, and Brenda’s improvisations were gorgeous and helped me re-see my work. 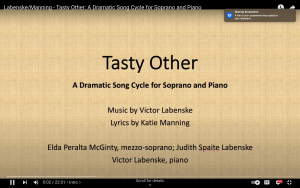 “Tasty Other”: A Dynamic Song Cycle for Soprano and Piano: Music by Victor Labenske; lyrics by Katie Manning (YouTube)

– Most recently, Victor Labenske created a “song cycle” from 9 of the poems in my book Tasty Other. We had a virtual premiere on YouTube during the COVID shutdown, but then we were able to hold a live performance in October 2021. Seeing the poems that I’d written based on my pregnancy anxiety dreams performed as songs on a stage in front of an audience was as surreal as you might imagine. This was also a very vulnerable but very wonderful experience. It’s such an honor when musicians I respect so highly want to spend time working with my poems!

In addition to the professor-related things, I spend a lot of time with my kids. There are the less glamorous answers: laundry takes a lot of time! I am the founder and editor-in-chief of the journal, Whale Road Review, as a side hobby, and I love that work I do out of love and for no money. I like to walk on the beach in the mornings when I can, meet up with friends at my local bakery (Con Pane!), listen to music, scroll on social media, swim, read … but then reading is part of writing too.

Katie: Thank you! Hereverent is a collection I’ve worked on actively for the last decade. The title is a portmanteau of heretical and reverent (and I like the way “her” stands out). I began this project because I was tired of people taking language from the Bible out of context and weaponizing it against other people, particularly people who are already vulnerable. So I took language from the Bible out of context and used it to make poems. More specifically, I used the last chapter of each book of the Bible as a word bank to create each poem. It’s due for release in March.
Note (and freebie) from the publisher: You can enjoy Katie’s previous Agape Editions title (the chapbook from which HEREVERENT drew its genesis), A DOOR WITH A VOICE, as a free PDF download via their Morning House imprint.

Where Can Readers Learn More About Katie’s Writing and Projects?

Where Can Readers Find You Online?

Thanks for joining us, Katie! Keep writing and performing, and we’ll keep tuning in!–Nancy

Katie’s How to Play poetry chapbook giveaway contest closed, and Carol Alwood is the winner!