April is National Poetry Month, and I look forward to it each year. Thomas Allbaugh is the real deal, a Renaissance Man with an amazing mind and way with words, whether used in poetry, prose, creative non-fiction, blogs, or academic writing. He occasionally plays his guitar and sings, and he’s a humorous and gifted speaker. Plus we’ve shared some “rich times” together talking and laughing. I interviewed him this month because of how much I’ve benefitted from his wisdom and how much his writing has caused me to pause to reflect and appreciate life.

Tom and Nancy are hanging out at a local writers group (ACFW-OC) where Tom was the speaker. Not only was he informative and encouraging, he kept us entertained with his gentle humor.

I met Tom at Azusa Pacific University when, after a decade in Teacher Education, I moved to the English Department where I spent the next twelve years working alongside him, full-time. We hit it off right away with many shared interests including that we were both teaching courses for students who were planning to enter credential programs (he was teaching composition for future elementary school teachers, and I was teaching courses in literature for children and adolescents for future elementary and high school teachers). We both promoted a love of reading and writing as our mantras. And we both liked to express ourselves in academic and creative writing forums. Now that I’m down to “occasional” teaching, we sometimes share a committee with a grad student working on a Capstone Project for graduation, and we often attend writing groups and conferences together. 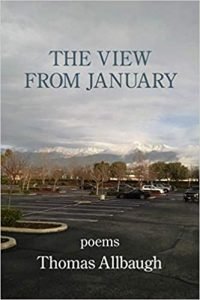 The View from January – poems that will catch your heart and mind.

It’s my pleasure to feature Tom’s autographed poetry chapbook, The View from January, as a giveaway prize (and I’ll mail it to you, too, if you win it) which Bev won. She’s already read and commented on it–see my latest newsletter, or ask me what she said.

[This post contains affiliate links. They don’t cost you a penny, and they allow me to keep writing! For more information, see my disclosures.]

My Interview with Thomas Allbaugh

Q: Tell us a bit about yourself, Tom.

A:  I grew up in Grand Rapids, Michigan. My father was a news reporter and my mother was really into painting and drawing, and though she decided to be a stay-at-home mother instead of going to art school, she imbued our home with art. I remember sitting in our backyard and learning to paint in oils when I was in the fourth grade. The smell of turpentine on summer afternoons sort of made it into my first novel, where the main character sees art students working on a campus lawn and has a flashback to his mother’s painting. My father also played guitar, so I picked that up as well–and heard a great deal of Segovia–enough to know that I wasn’t very talented. Eventually, I had a class in college with a local novelist and decided to be an English major. I became very interested in learning how to write and also how to teach it. I ended up doing that, teaching writing and, after getting an MA and then a Ph.D., the second with two small children, I joined the faculty at APU, where I was lucky enough to meet you and others. My wife is a music teacher, and together we have had four children–two girls and two boys.

Q: What inspired your writing of The View from January? What is your favorite poem in it? Anything else?

A: My inspiration started with a student, Kathryn H. Ross, who responded to a Facebook post I made in early January of 2017: “The View from January.” From there, I began to think about how January–or the goddess Janus, after whom January is named–represents both beginnings and endings. To be Janus-faced is to look both forward and back. That was how it felt to write the poems I was writing. Writing poetry is to look back and to look ahead. This especially became true later that year, 2017, when my son Michael took his life. There is a lot of looking both ways in that chapbook, and I have two favorites from it–one called “Instead,” which I’ve noticed that many people over age 50 seem to like. It involves resisting our culture’s push against growing old and to, instead, do things that help us to take responsibility for what we know, and for what knowledge we may be losing. The second poem I like is the one I wrote three days after my son’s death. It’s called “What We Must Do Now.” It has been read at different grief groups. I also like the cover of The View from January because it is a photo I took.

Q: What are some of your hobbies?

A: I do love music. I continue to limp along on guitar. I do also love to read lots of memoir and literary fiction, though it seems that social media takes up more of my time than I like to admit. Over the last four years, I have found that reading and writing poetry have been two important ways for me to process my grief. 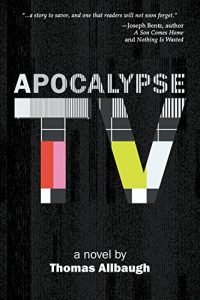 Part humor and mystery: Walter Terry, an English professor full of self-doubt, hopes to resurrect his career by going on a religious reality TV show.

Q: Tell us a little about Apocalypse TV

A: Apocalypse TV is about popular culture and what it means in Christianity to be a man. It really started with the main character Walter Terry, and then it sort of grew around him. I did a lot of research on television talk show discourse for my dissertation, and I was interested in how television can situate programming in our values. This is really powerful today in an era when Russia has so powerfully gotten away with sowing doubts about misinformation and truth in reporting. But Walter is an academic, and a Christian, and he faces two things: He goes on a TV reality show, and he confronts questions of what religious people think it means to be a man. Walter, of course, is an academic who questions everything, and in popular culture, on TV, that plays very poorly. There are also questions about what the Bible actually means by the word “apocalypse”–which is Greek meaning to “remove the curtain” or “to reveal,” not anything about fighting or battles or marauding thug gangs. 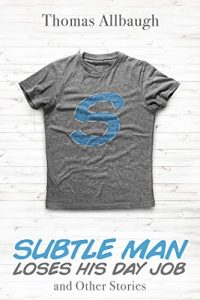 Short stories, some set in the Side Step Tavern or somewhere nearby, that offer destinations we might expect if we were to listen more closely to our neighbors and, perhaps, to our own hearts.

Q: What is your favorite story in Subtle Man Loses His Day Job and Other Stories?

A: These were fun stories to write, especially in playing with points of view. But my favorite is the final story, “Courtship in the Getaway Car.” This is told by Subtle Man’s girlfriend, Monica (named after Augustine’s mother), and she is learning trust issues as they flee Michigan and travel across the country to finally reach California, where Subtle Man thinks he will be better received. The ironies are rich there, or I thought they were–subtleties in California? Anyway, she is a really interesting character who really challenges Subtle Man–why does a subtle man need to wear a costume, why not just leave a business card? She pushes him to question why he is not just a spy. Why a superhero? She was an interesting character to explore, and I’m trying to write more about her and Subtle Man from other points of view. For example, what about his nemesis? 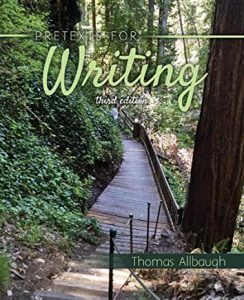 Q: How did you come to write Pretext for Writing for college-level writing courses?

A: My dissertation director often said that first-year college textbooks really are very poor at representing the careful research being done on the teaching of writing in Composition. So when the time came, I tried to do that, to write a first-year textbook that would introduce both college students and their teachers (most of whom have not studied composition) to the great research in composition.

Q: What are you working on now? Do you have a possible release date?

A: I am working on a grief memoir of my son and a collection of poems around his loss. They started out together in the same manuscript, but now they are separate, feeding on their own and growing. I hope to finish this summer. 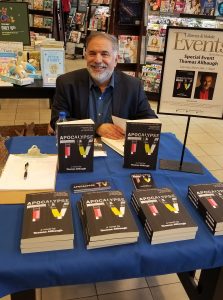 I have two ideas for two more novels–one is a companion to Apocalypse TV. It is called Radio Eden. I started writing it, but then my son died, and I found myself writing other things. The other novel may be more of a novella about a composition teacher in a literature department. I have notes that are a lot of fun.

I really hope that the war in Ukraine ends soon and that the truth comes to light about what Putin was really doing there. I also want to say that I really loved reading Gunny Sack Hell. I look forward to the author’s next book.

Where can readers purchase your writing?

The View from January

Subtle Man Loses His Day Job and Other Stories

Thanks for joining us, Tom, and we’re looking forward to the release of your upcoming memoir and new poetry collection next year. Thanks for sharing your wisdom and words with us. And thanks for your kind words about Gunnysack Hell.–See you soon! Nancy

(Contest ended May 5 for Thomas Allbaugh’s poetry chapbook, The View from January)

Previous Post: « (And She Could Fix Anything book giveaway winner is … Kristen Sipper!) Picture Books Starring Remarkable Women Who Changed the World
Next Post: Up Close and Personal with Author Susan K. Beatty »